Here are two documents for download  for the audience of the Mark Fisher Memorial Lecture at Goldsmiths College, Friday 29th January 2021. To download just right click on the document link below.

The film text is the text of the narrations by Paul Jamrozy and Alexei Monroe for the film that goes with the event titled ‘Test Dept: Notes from the Underground’.

The extract of the book is a taster of the 386 page Test Dept book ‘Total State Machine’. The full book is available from the PC-Press shop.

Notes From The Underground_Script All comp1 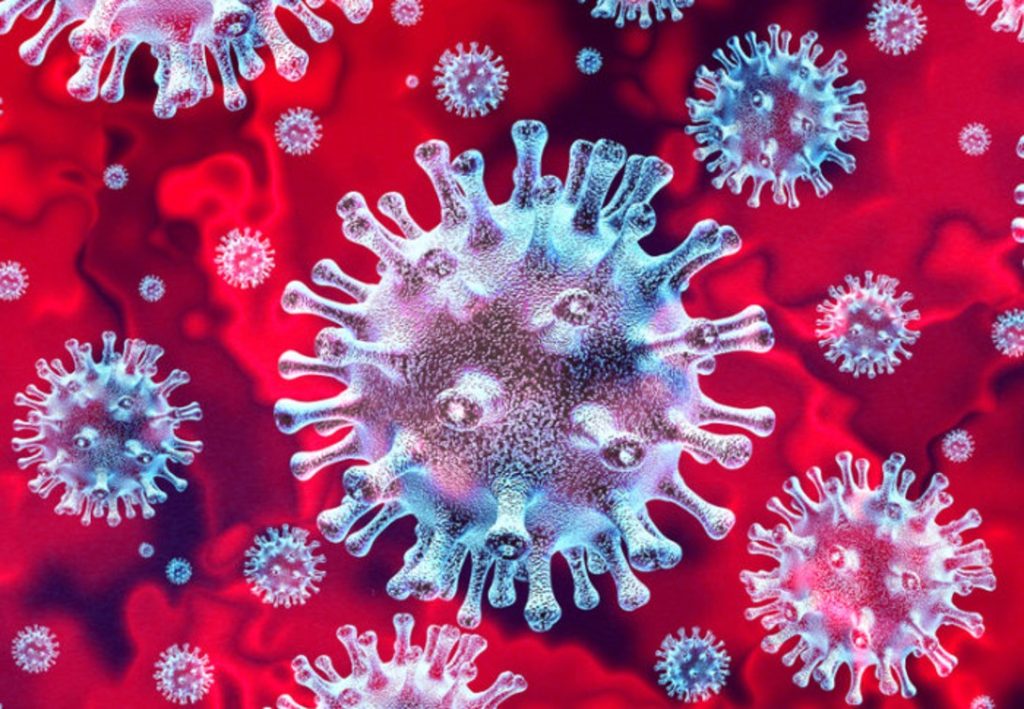 Continuing the celebrations around the 5 year anniversary of the publication of #Totalstatemachine: the book on the history and continuing work of Test Dept, Alexei Monroe and myself, as the editors of the project and contributors to the book, felt we needed to reflect on the work and the current state of things so have written a piece each collectively titled: TOTAL STATE MORATORIUM.

They are attached below as PDF’s. Alexei’s piece is titled: Proven Inaction.

Pete’s piece is titled: ‘Speak Truth to Power’ OR ‘Stick to the Script’ 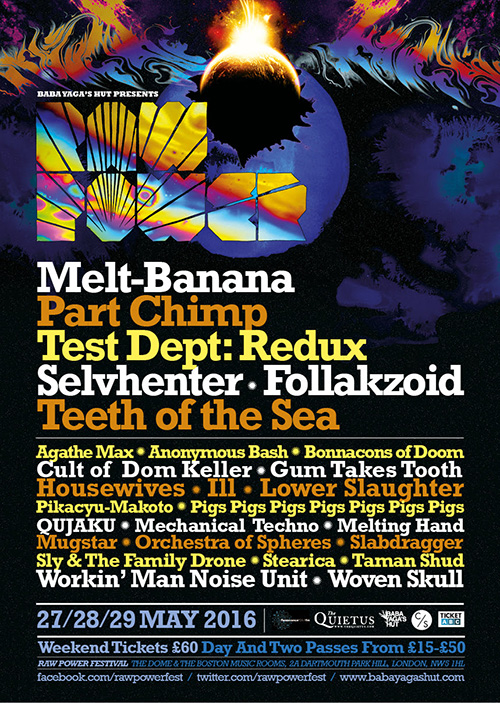 Test Dept Redux – Graham Cunnington, Paul Jamrozy, Zel Kaute and Charles Poulet work together as TD redux after a fantastic set at The Wave Gothic Treffen in Leipzig, Germany. This will be the first time the group have done a live show in London in this format. Expect intensity and power!

The final pieces for the Hardback book set are now all in place. We will begin shipping the boxes towards the end of next week after assembling the whole package at facebook.com/ForteMusicDistribution in Monmouth.

This has been a long journey but all you patient, wonderful people who have waited so long will get a beautiful package through the post soon. We will also be supplying an authentication certificate which will be mailed to you separately and have special messages for those who have bought the set. Thanks for waiting and here (below) is an image of the poster that ships with the box. The second poster will ship separately with the authentication certificate. 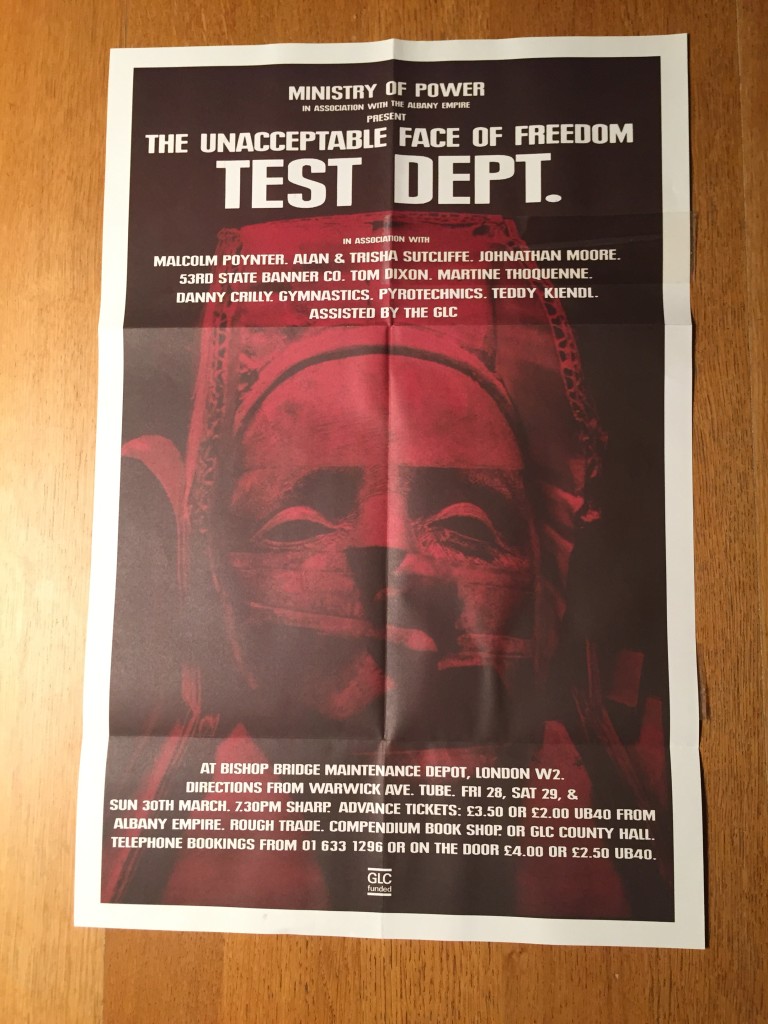 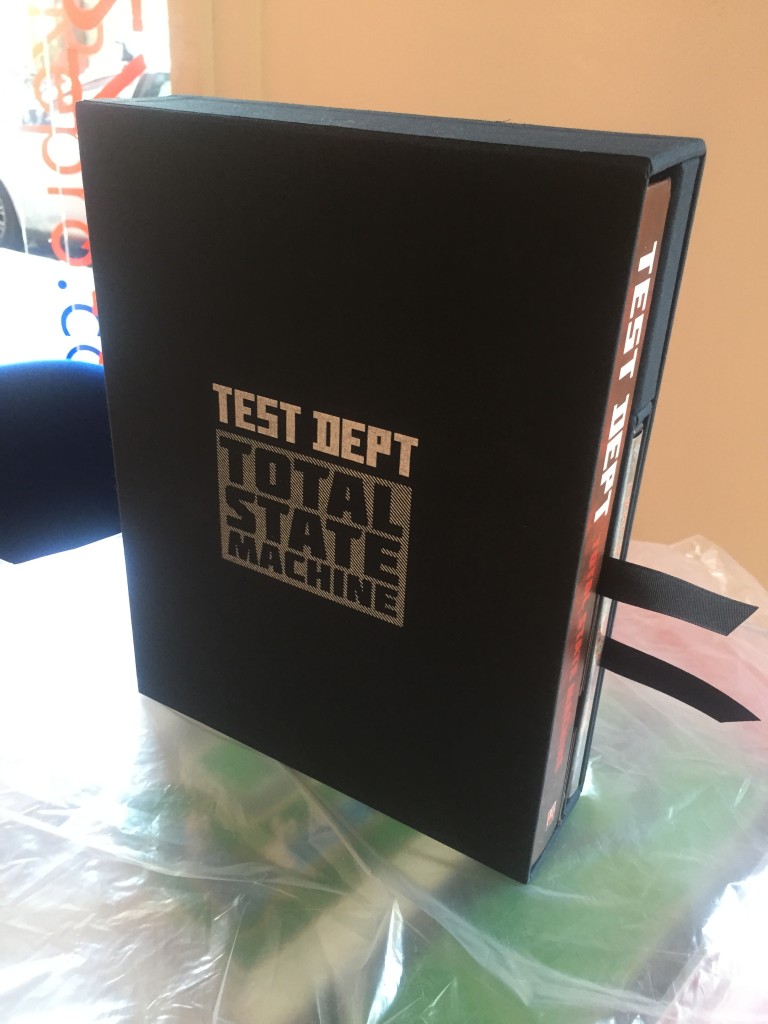 Uwe Shütte from Aston university has written this piece about the book in the Times Higher Education magazine: THES TD Uwe Shutte review

Uwe Schütte, reader in German at Aston University, is reading Test Dept’s Total State Machine (PC-Press, 2015). “Test Dept were one of the most radical British bands. Their extreme industrial sound fused sonic experiments with political activism, notably during the miners’ strike of 1984-85. In bringing together art, theatre, music and politics, they produced monumental events that assaulted all the senses. This richly illustrated book details a vigorous body of work that has lost none of its relevance.”

Test Dept are touring the film DS30 in conjunction with the Av Festival and PC-Press. Here is a description of the film and tour:

Marking 30 years since the 1984–85 miners’ strike, DS30 is a political collage of sound and image. Commissioned by AV Festival in 2014, the film was originally presented within the monumental lines of Dunston Staiths, a structure built on the River Tyne in 1893 to ship coal from the Durham coalfields to the world. During 2015, AV Festival is touring the film to selected cinemas in the North of England and Scotland.

Featuring footage of mining communities together with material from Test Dept’s own archive related to the strike, DS30 reflects on the group’s nationwide Fuel to Fight Tour in support of the miners. The DS30 Tour also celebrates the new publication Total State Machine, a unique historical document and visual representation of Test Dept.

For full details of dates and timings see http://www.testdeptds30.co.uk 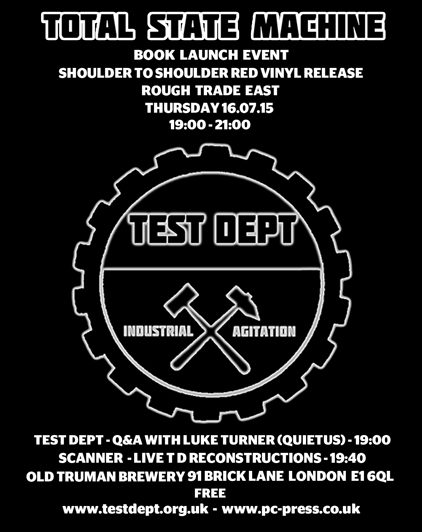 ALSO  to let you all know that the Red Vinyl edition of the ‘Shoulder to Shoulder’ album will now not be a part of this event. The release is being held up by a legal issue that will soon be resolved. Onwards and Upwards PC-Press.

The symposium on May 28th at Aston University where academics, contributors to the book and other interested parties discuss the influence and impact of the group will be followed by an after party at Vivid. This is to celebrate Test Dept’s return to the public sphere.

The return is realised in the form of the book – Total State Machine – published by PC-Press www.pc-press.co.uk; which is an account of the history, work and actions of the group up until their recent DS30 show at Dunstan Staithes. This was commissioned by AV Festival to remember the miners’ strike of 1984/85. We will also celebrate the release of the 12” vinyl single; Tested Product for Record Store Day and the re-release of Shoulder To Shoulder; their album with the striking South Wales miners choir from 1984 which will be rereleased on 1st May on red vinyl.

For the evening their will be DJ sets from Test Dept themselves, Alexei Monroe of SZ Berlin and editor at PC-Press and a mystery guest to be revealed nearer to the date.Test Dept will line the walls with art manifestos and statements from their historical archives and show footage of live performances and actions from some of their historic performances. 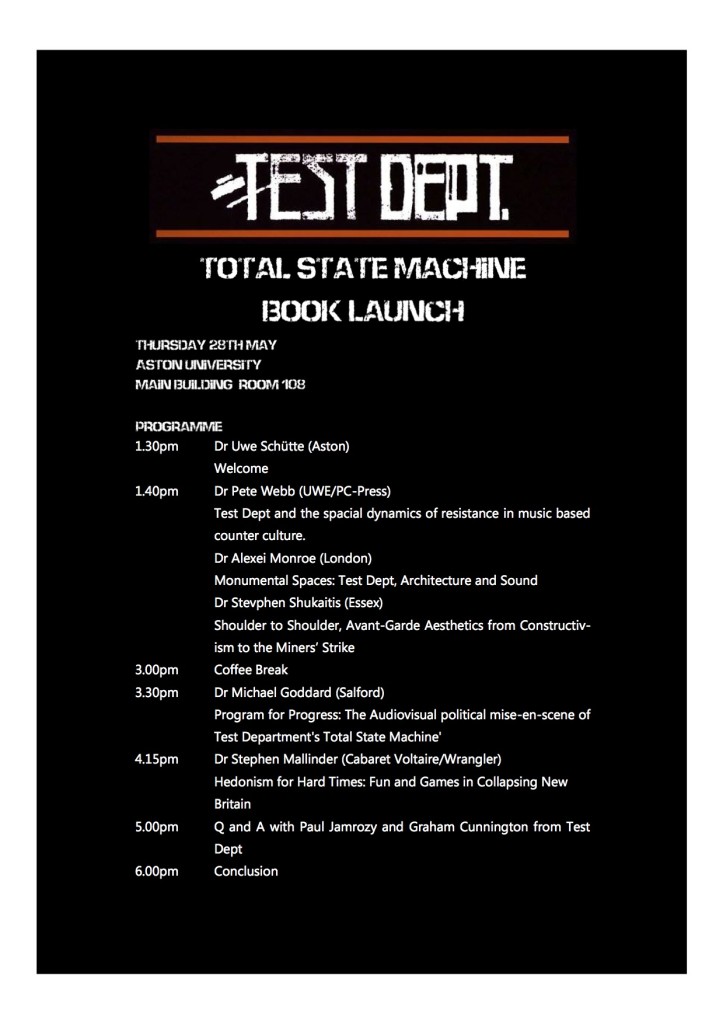 Here is the Press Release from Aston University for the event. The event is free but you need to register by contacting Dr Uwe Schütte via u.schutte@aston.ac.uk

The influential radical music group The Test Dept will launch a career retrospective anthology at Aston University next month.

The book, Total State Machine, will reflect on the impact and importance of the band that formed in 1981 and made stridently political and socially conscious music until they disbanded in 1997.

It will feature a series of reflections and evaluations by experts and aficionados of Test Dept, including Dr Stephen Mallinder, lead singer of seminal art-pop group, Cabaret Voltaire. As well as manifestos, excerpts from tour diaries and many previously unknown stories and documents, the book also contains hundreds of photos and pieces of artwork from the band’s archives.

Test Dept were well known for their involvement in various political causes, particularly their support for the miner’s strike of 1984 during which they collaborated and went on tour with the South Wales Striking Miners Choir. The band are also seen as a pioneering industrial music act, using ‘found’ materials such as factory equipment and everyday objects as unconventional instruments to produce a uniquely jagged, metallic sound.

Many of the contributors to Total State Machine will speak at the launch event on 28 May, which will be opened by Aston academic and resident pop music expert, Dr Uwe Schütte. The event will be capped by a Q&A session with Test Dept founders Paul Jamrozy and Graham Cunnington.

Dr Schütte, who convened the first ever academic conference on Kraftwerk earlier this year, said: “It is a real honour to host the launch of Total State Machine. Growing up in Germany, I became aware of the Test Dept for their reputation as political radicals on the left wing of industrial music. I am really looking forward to hearing more about them and reacquainting myself with their work beyond music again.”

Test Dept’s impact on a variety of musical genres is well noted. Throughout the course of their career, they experimented with and influenced house music, break beat, industrial music, synth punk and electronic body music.

Dr Peter Webb, co-founder of PCP Press who will publish Total State Machine, said: “Test Dept were a massive formative influence on me. I was attracted to them by their independent spirit and the way they used sound and force to make deeply emotive music. I have always felt that their influence and importance was unwritten in the archive of popular culture. This book redresses that balance and presents a document that examines their work as well as representing it.”

For more information and to attend the launch of Total State Machine at Aston University on 28 May from 1pm, contact Dr Uwe Schütte via u.schutte@aston.ac.uk 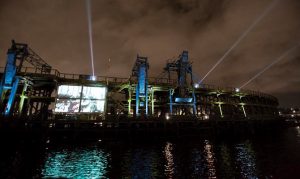