PC-Press is an independent DIY publisher, formed in 2013 by Pete Webb with help from Alexei Monroe that values the art form of the book. We are interested in publishing and developing work that is about challenging music, counter culture, DIY culture, music scenes, untold cultural history, critical analysis and representations of interesting artists and their work. 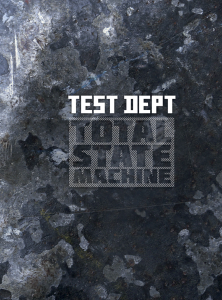 Our first publication is the Test Department book “Total State Machine”. PC-Press worked with Test Department and three of its key members Paul Jamrozy, Graham Cunnington and Angus Farquhar on the book which charts their history, music, artwork and has essays and reflections written by the band themselves and many of their collaborators or people affected by their work.

They described themselves as being born” in the decaying docklands of South London” and that they and their music were “an urgent reaction to the materialistic drift and reactionary conservatism of the prevailing musical and political culture” of the 1980s.

I was attracted to their work partly because of the impact of going to see their performances throughout the 1980s but also by their independent spirit, their use of found objects and deeply emotional classical and electronic music to produce some of the most powerful work I have ever witnessed. Their ethic and moral compass also attracted my growing political identity during the 1980s period. Overall though this project shows what Test Department as a group achieved in a short space of time with little economic resource but with immense creative vision and an incredible work ethic and energy. Their story and history had to be told and I am very proud of the fact that PC-Press could work with Test Department to realise this book.

Test Department in its former state may have ceased to function but a new version of the group has emerged to engage with the current cultural and political climate called Test Dept Redux. We will be posting related events and info on the site. All three members had also carried on the spirit of Test Department with their own work in NVA (Angus), C33 (Paul Jam) and Gray C (Graham) and we will provide links to these projects. The book was published in May 2015. 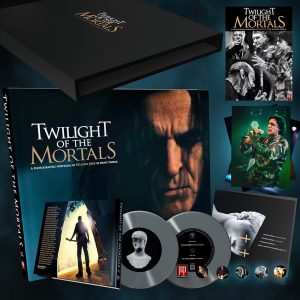 Our second project is a book with the title of ‘Twilight of the Mortals’ a book of photography that charts the last 8 years of the extraordinary return of the band Killing Joke in its original line up and format.

Mont Sherar, a professional photographer and DJ who was a regular at Miami’s Fire and Ice and Kitchen clubs in the 1980s, has been photographing the band since the return of the original line up in 2008 after the untimely death of bassist Paul Raven. His relationship with the band goes back to the late 1970s where then DJ Steven R. Gilmore played the song “Are You Receiving” at a club in Vancouver called Luv-A-Fair. Mont was so impressed by this completely unique sound, that he would go on to become a DJ himself, “for no other reason than to spread the word about Killing Joke”. Sherar got them booked into a club in Miami and was blown away by their brutal and powerful performance.

The book has a foreword by John Robb of Louder than War and contributions from Fletcher Stewart, Rahman Balloch, Pete Webb and Mont Sherar himself. The book will have a hardback deluxe edition that will have several exclusives with it that will include a vinyl record or two with a sleeve designed by the man who became a premier sleeve designer through the 80s to the present day; Steven R. Gilmore. There will be other exclusives with this package to be announced in due course.

The photography of Sherar is beautiful, atmospheric, unique, elegantly presented and totally captures the essence of Killing Joke. The band can be seen through profiles of each individual member, the band live, in the studio, in rehearsal and writing rooms, relaxing and in discussion with one another. This is a truly rare and one of a kind view and representation of a band, who even in their twilight years are on top of their creative powers, having produced a trilogy of albums that ended with the best ever selling Killing Joke record ‘Pylon’.

Sherar has created a series of amazing images that we are now going to turn into a beautiful document of the band with commentary from some leading and insightful writers. The book is scheduled for publication in November 2016.